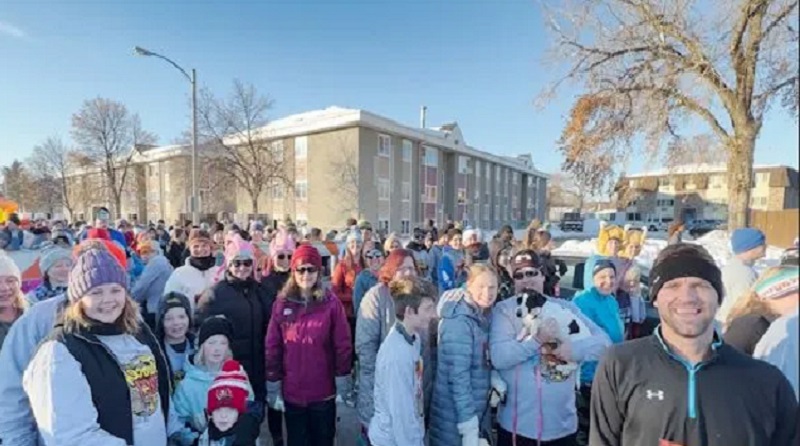 Bismarck, North Dakota – Around the holidays, traditions are a big deal, and one in this community just finished a run. Many others this morning ran off their Thanksgiving dinner before it was even served by donning their running shoes.

The Cystic Fibrosis Association of North Dakota’s main fundraising event is the CFA Turkey Trot. And in the spirit of the season, costume runners went all out.

“I have been the grinch for four or five years. It started with just a hat, and then I got the face. And this is real, I can’t just take this off,” said Ariann Doe, 5K Turkey Trot Runner.

A group of individuals banded together 33 years ago to gather money for a buddy who was in need of a double lung transplant because of issues related to cystic fibrosis. There, a custom that so many people now follow was born. It developed into a tradition that the community enjoys and anticipates each year.

Doe said, “I like doing all these races. Obviously, I get into the costume, and this is a race that a lot of people come to and it’s to have fun. You know, it’s not like all really competitive, because I don’t run that fast. I mean look at me.”

The community is the focus of the CFA Turkey Trot. To run alongside the Missouri River and through the entirety of our state’s capital, about a thousand runners travel from near and far. All levels of athletes are welcome at the Turkey Trot. There is something for everyone with a timed 10K, a 5K, a 5K Race walk, and an untimed fun walk!

“I love running, and I thought I’d try it. It’s just like the adrenaline, it’s exciting, and it’s fun,” said Latoya Dutchuk, another Turkey Trot Runner.

It is simple to understand why this event has expanded so greatly when there are smiles and cheers all around. On the snowy pavement, parents, children, grandparents, and even great-grandparents were prepared to set off. As the clock reached 9:15 A.M., you could sense the excitement in the air as the gathering got larger and larger.

“We like the fun atmosphere and being outside, being outdoors. It’s a nice day today for it,” said Kim and Brady Feiring, who are Turkey Trot Veterans.

The beautiful sun that was shining on them caused runners to express their gratitude for this year’s run.

On the men’s side, Kyle Downs won the 10K race after finishing in 36 minutes and 40 seconds. The women’s division was won by Reno resident Lauren Evans, who completed the six miles in 40 minutes and 16 seconds.